I've finally finished a book; well, actually, I've read several books in the last little while, but I haven't really been reading anything new lately. However, that has changed! I just finished reading Battle Magic by Tamora Pierce, and I thought I'd share a little bit of what I thought about it with you. Because why not; I like books and reading, I'm trying to encourage myself and others to read, and sometimes sharing a book is the best way to do that. 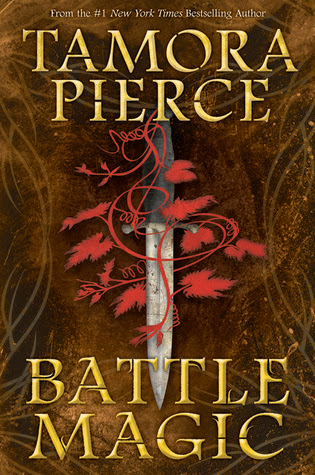 I have to preface this my saying that I've been waiting for a new book from Tamora Pierce for a long time, and then once I received it I was busy and couldn't read it right away. I was also lost among re-reads, so even though this has been sitting on my shelf since Christmas, I've only just finished it. I don't know how or why, but my moods dictated that I re-read other stories before turning to this, and I'm sort of glad that I did. I re-read some of the earlier Circle of Magic books, and I managed to refamiliarize myself with the characters of Briar, Evvy, and Rosethorn.

I'm a little bit disappointed. As much as I hate to admit it, I just wasn't as gripped by what was happening as I have previously been by Pierce's books. It could, of course, be because I've already read The Will of the Empress and thus already know a little bit of what must have happened; heck, I've read Melting Stones as well, so I even knew Luvo. There just weren't very many large plot devices that, as a T. Pierce fan, I didn't know had to happen before the end of the book. As much as I love Briar (he's my favourite of the Discipline Cottage students), Rosethorn, and Evvy, I didn't see the growth in them that I wanted to see; I feel like because I knew them before the book, and after the book, there couldn't be much of a scope for overall growth throughout the novel, as it had already been established how they would end up. As much as I love the characters, and was thrilled with the way they interacted with each other (something about the relationship between Rosethorn and Briar just makes me grin), I found myself wishing they could grow and evolve.

The new characters were both highlights, and disappointments for me. Parahan and Jimut were interesting, fun new characters to meet, and I feel like they were well written; in fact, I'm a little bit sad that we don't get to know more about them, their lives, and their futures. The Emperor, well... I'm not sure where I sit with regards to him. I understand that he's supposed to be a large political threat, and a vile, vicious man, but I just.. I didn't find myself seeing him as much more than a spoiled child and a plot device; he was the powerful enemy that would invade Gyongxe, so we had to see how vile he was: He'd burn down an entire garden because of a single defective rose, and he'd buy people of great rapport to be treated as pets, therefore he must be awful. As a great and powerful emperor, he just fell a little bit flat to me. I have to say though, so did the God-King; he struck me very much as a boy who was a leader so that Gyongxe was more vulnerable in appearance at some points, and then at others he was a very wise person. I'm sure this is all by design, because of the shared connection with the Gods, but it was a bit bizarre.

The descriptions, and uses, of Ambient Magic were of course interesting and well written, but there were a few things in the plot that were questionable to me: why did Rosethorn have to go on her quest; was it because of the religious implications, or was it just a plot device so that her strength in later novels could be continued? The rescue of Parahan I understood, and applauded, as it helped to greatly drive the novel forward, but the huge emphasis put on Jia being the one to harm Evvy I could have done without; it seemed like a fairly unnecessary detail to me, and though I'm sure it was supposed to showcase a betrayed relationship, it fell flat with me; it would have been more effective for me personally if someone who hadn't shown any care for Evvy had been her prosecutor.

Overall, I have to say that I enjoyed the story as a whole, and it was nice to see exactly why the character behave as they do in later stories. However, my one great regret is that I read this after I'd read Melting Stones and The Will of the Empress. If you've never read any Pierce, or if you're just starting to read about Emelan, I would certainly recommend this book; heck, even if you've read all the other books, I'd recommend this book. However, if you can read them in chronological order, as opposed to the order in which they were written, please do!

I'd give this novel 3 happy shakkans out of 5 because of the order in which I ended up reading it.

So, how're we feeling? Hopefully like grabbing a mug of tea and settling into a new novel. That's what I'm off to do. Well, I'm drinking water right now, and I've got a copy of Anna Dressed in Blood waiting for me, on loan from the local library. Ciao!
Posted by Unknown at 9:23 PM